Could you be SO wrong?

Captain Tom Moore, a British 99-year-old war veteran, decided to walk 100 laps around his garden before he turns 100 to raise £1000 for the NHS.

Evidently, he managed to raise more than £12 MILLION!

His achievement, hence his potential, was 12 thousand times greater than his “goal”.

What if your belief system is similarly off-track?

Commit to what you really want, not what you think you can do.

Allow your character to be shaped by your vision!

I embrace my potential.
I am worthy, I can and
I will manifest my vision!

You deserve everything you want,
and we all deserve your best self! 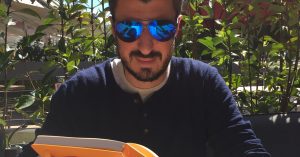 Shoe shinning millionaire! #PowerThoughts Last night I watched the movie “The Banker” based on the story of Bernard Garrett (Anthony Mackie). What struck me most

Emotional Fireworks! #PowerThoughts Today is Easter Sunday in Greece. Last night at 12:00, the time that Resurrection is celebrated, we went out in our balcony and

Coronavirus: Acceptance and Denial! #PowerThoughts When dealing with a tough situation, many people resort in denial. Acceptance is the first and vital step towards resolution. However, many

Own Your Future Challenge with Tony Robbins, Dean Graziosi & many thought leaders!

Join the Own Your Future Challenge